It had snowed overnight so in the morning Vinny (the car) was covered with frozen snow.  After clearing the windows we set off to our first destination of Geysir.  The roads were covered with a layer of snow and ice so we took it slow and steady until we get more used to the driving conditions here. 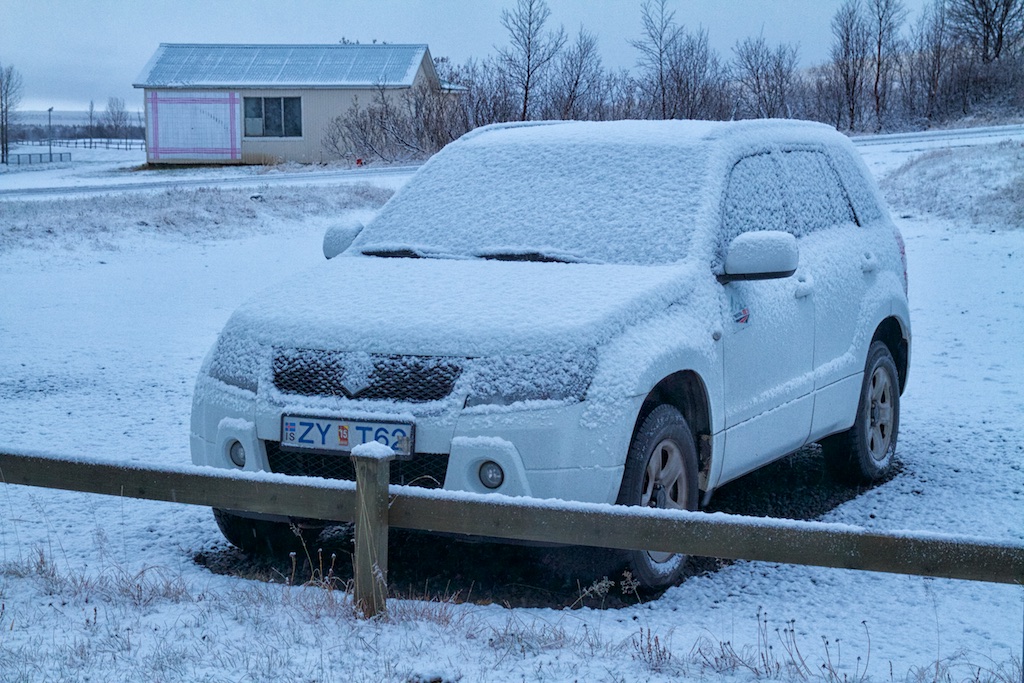 There weren't many cars about when we arrived at Geysir so we parked up, crossed the road and headed through the gate into the site.  The first noticeboard was very scary.  Especially the bit about the nearest hospital being 62 km away. 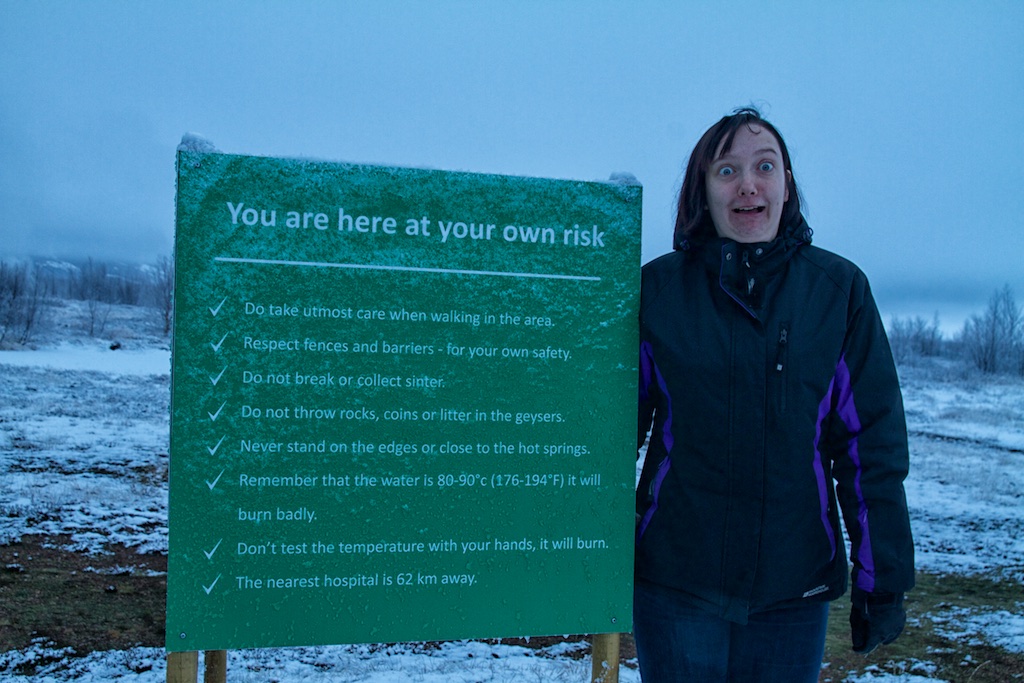 There were lots of small bubbling holes in the ground and a strange hutlike thing which was blowing steam out of the top and one end.  But then we reached the main attraction, the Strokkur Geysir.  Behind us was a snow covered hill and we thought it would make a better backdrop to the erupting geysir than the grey sky in this shot and decided to go around to the other side later. 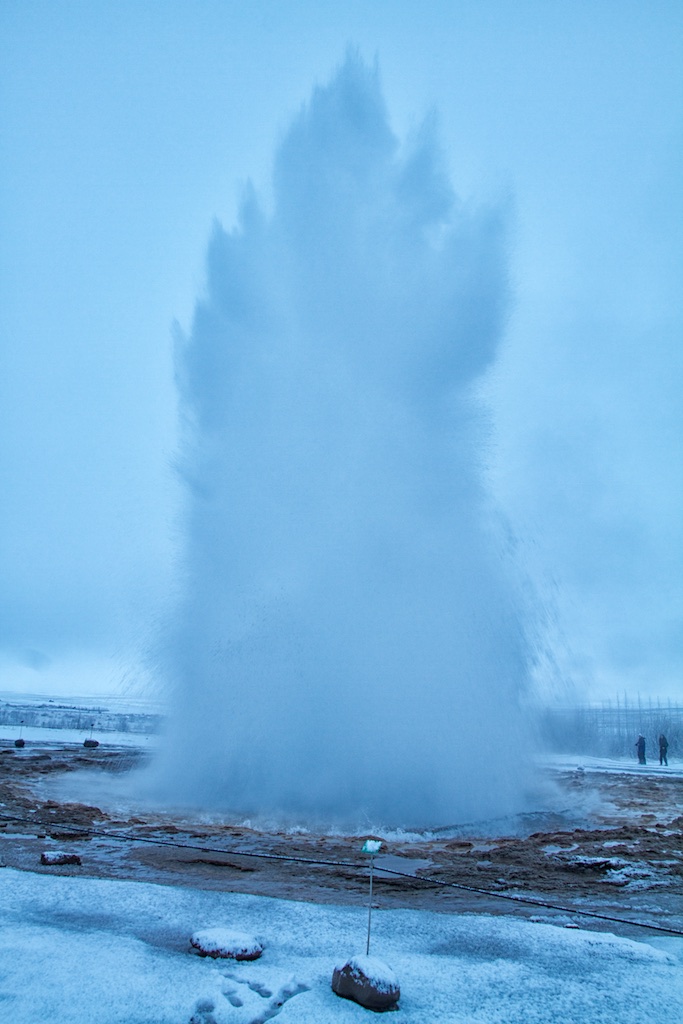 Up the hill a little was this very blue pool next to another one which looked to go down a deep fissure in the rocks.  It seems that people insisted on throwing coins into the pool even though there were signs asking visitors not to do that.  Unfortunately I didn't manage to get a decent shot of the second pool but maybe we will go back later in the week for another try. 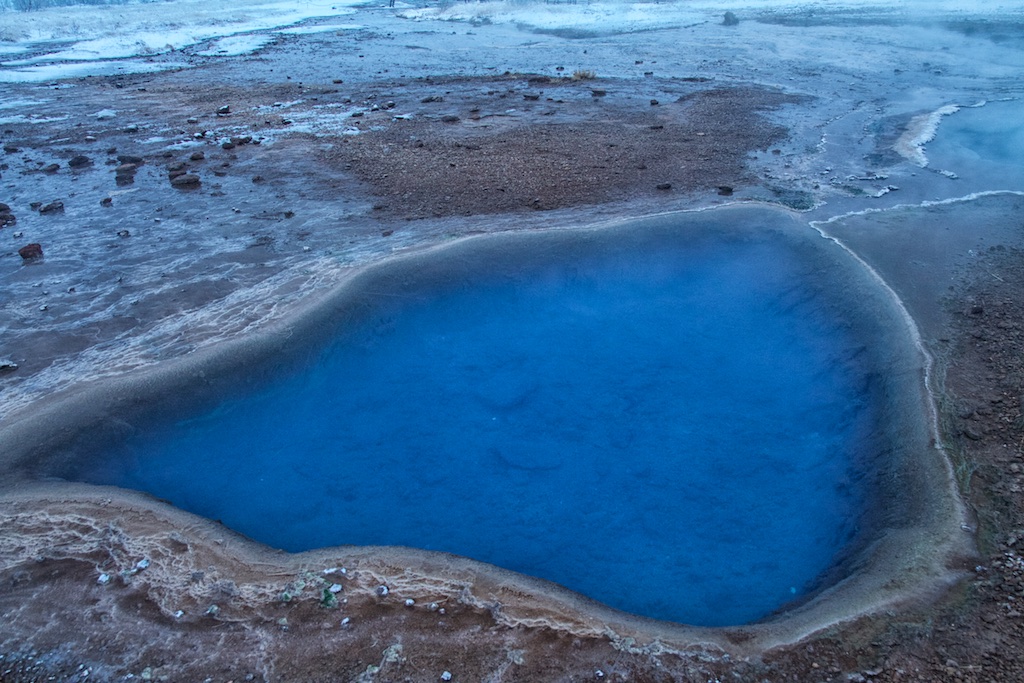 We walked further up the hill to a viewpoint over the site and I took this shot of lots of people watching an eruption.  Where had they all come from, we were practically on our own a few minutes ago? 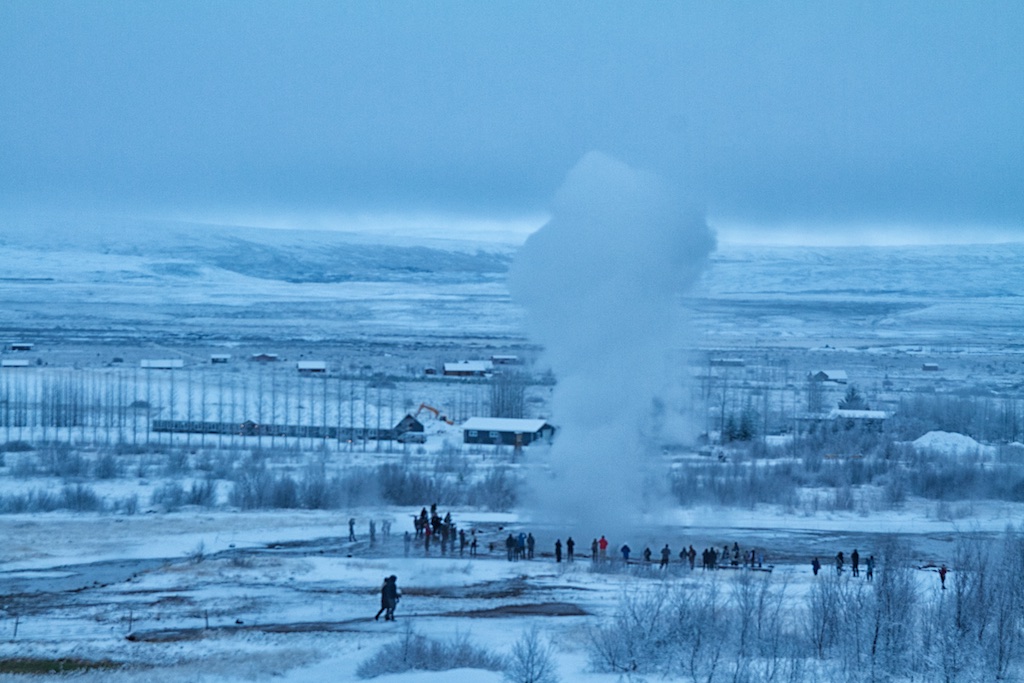 This is the view up the hill that I took as we were heading back down to the main geysir site.  We went to have a look at the original geysir which is no longer erupting an is not just a large hot pool of water, so I haven't posted a picture. 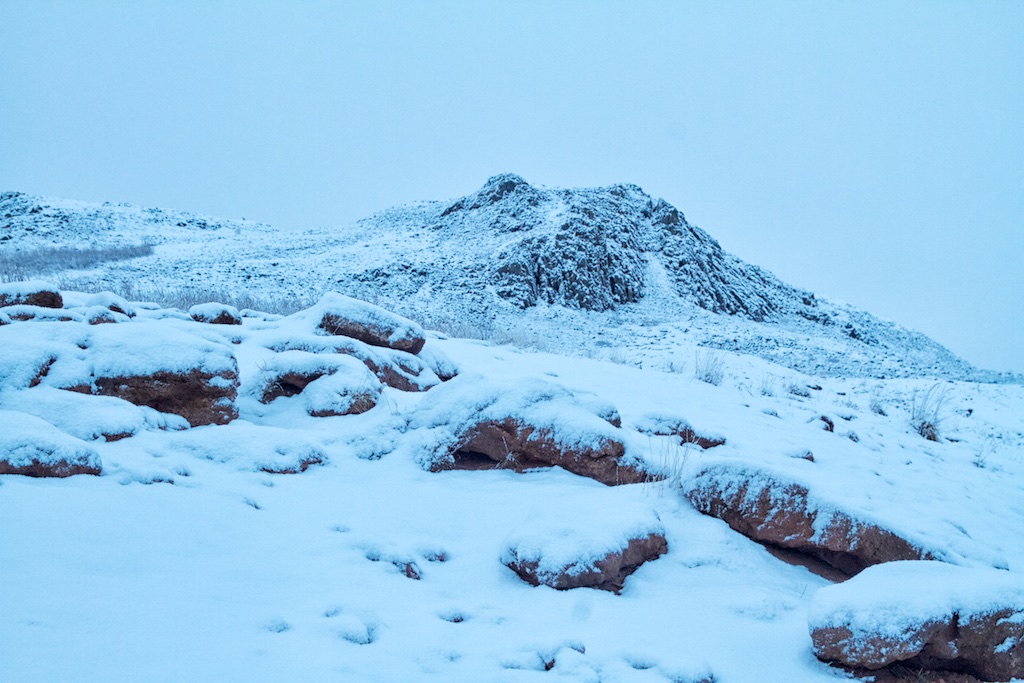 As we were walking around we noticed that on the horizon there was a very vivid band of blue below the clouds.  It wasn't the blue of the sky but much more of a green blue, very strange. 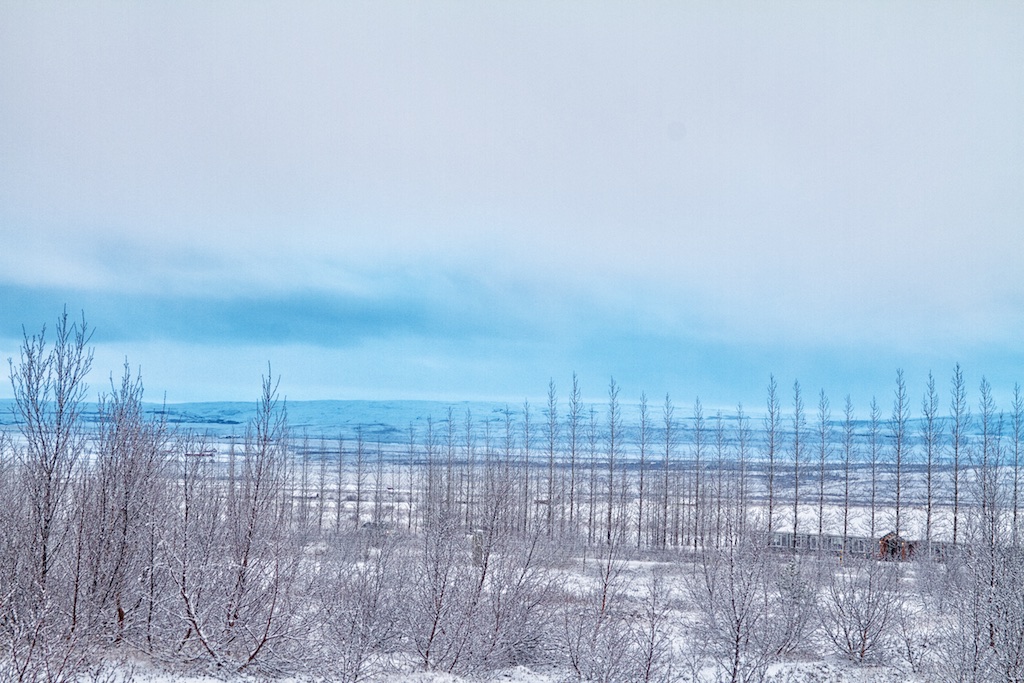 I wanted to take some pictures of the geysir erupting using my fisheye lens so that I could get the whole scene in from close up.  We first tried from around the other side but couldn't get close enough so went back around to where I took the first set of shots.  I managed to get a series of 29 shots so I converted them to a gif to show the geysir in action.

In this next shot from Geysir there was our first glimpse of the sun peeking through the clouds and it was reflecting onto the hot water running away from the geysir. 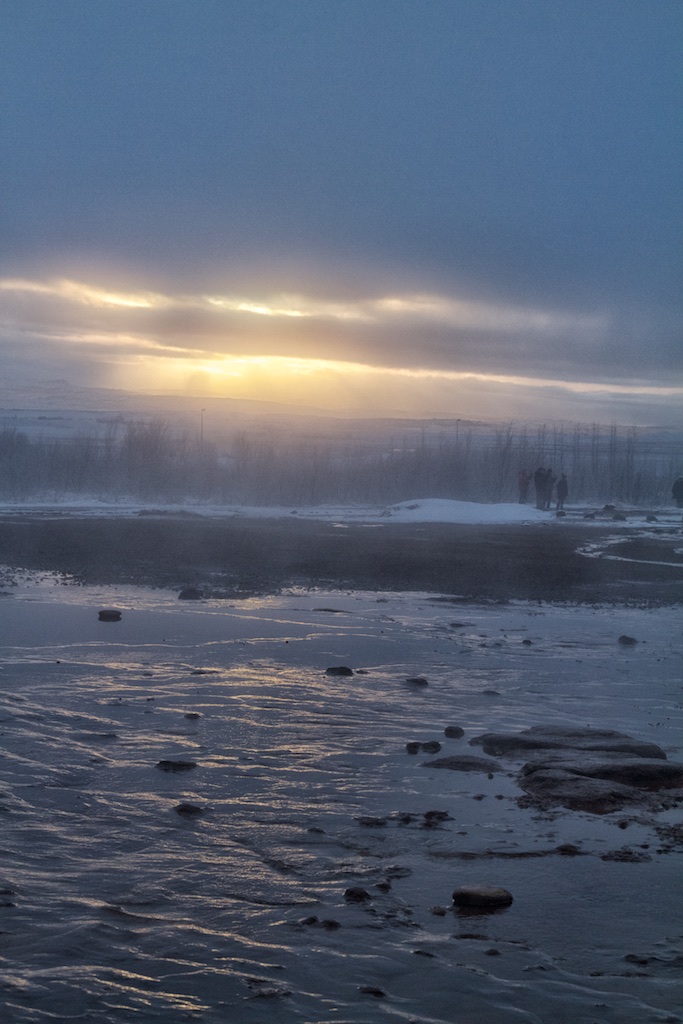 Back near the car park was the Hotel Geysir all decked out for Christmas, very cute. 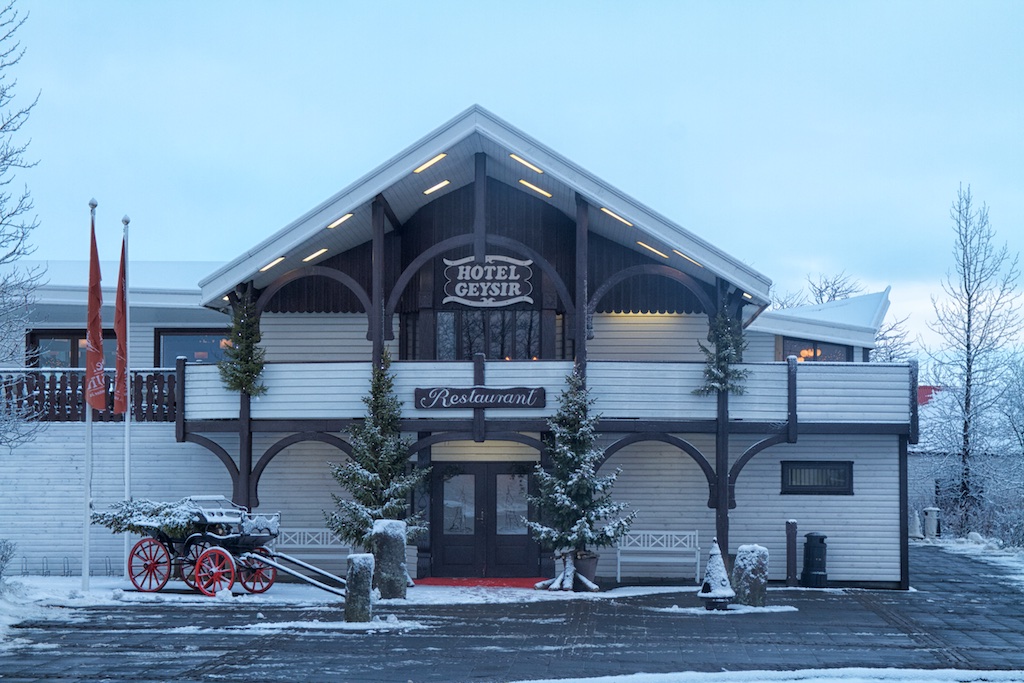 While we were at Geysir several coach tours had come and gone and the car park was much busier.  We had a quick coffee at the cafe and looked around the gift shop before moving on to Gulfoss.  The road to Geysir had started to clear of snow a bit but the road onto Gulfoss was still pretty slippery, but Vinny was in his element.

When we arrived at the Gulfoss car park we weren't completely sure where we were because all the signposts had been coated white by the overnight snow. We had just parked up where there were a few cars and a couple of coaches to have a look at why they had stopped here and then realised we had arrived.  We walked around the gift shop and headed down the steps to another car park which is the one which can be seen on the webcam at the Live from Iceland website (unfortunately the site doesn't appear to be functioning properly at the time of writing).  This first shot is from a viewing point at the edge of the car park showing the view up the river with the two part of the falls in the foreground. 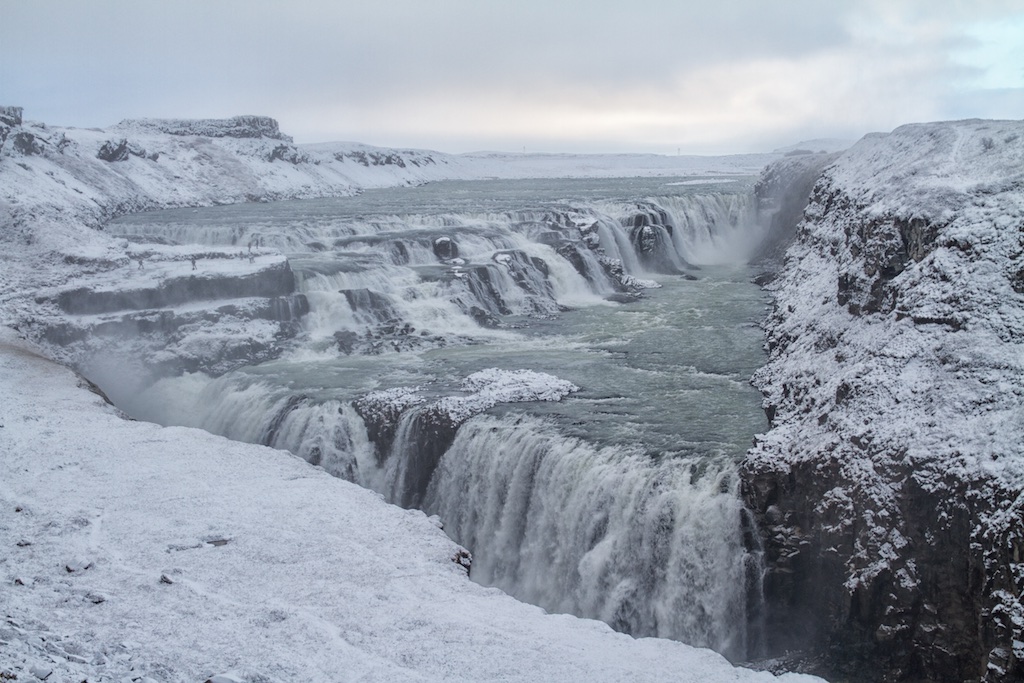 The path down from the car park to the place where the people are standing on the left of the first picture had a chain across it because of the bad weather in the winter.  But like most other people we climbed over it and headed down the very slippery snow covered path.  This photo is from the top of the second fall and down the canyon below. 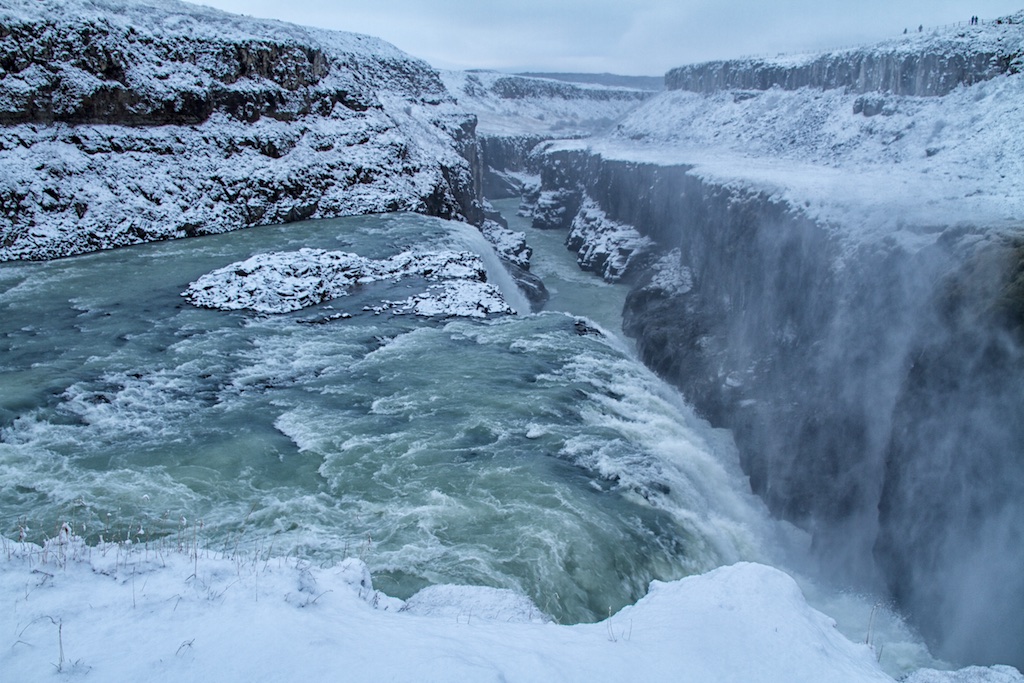 Here's a little snowman that someone had made near the upper falls, cute. 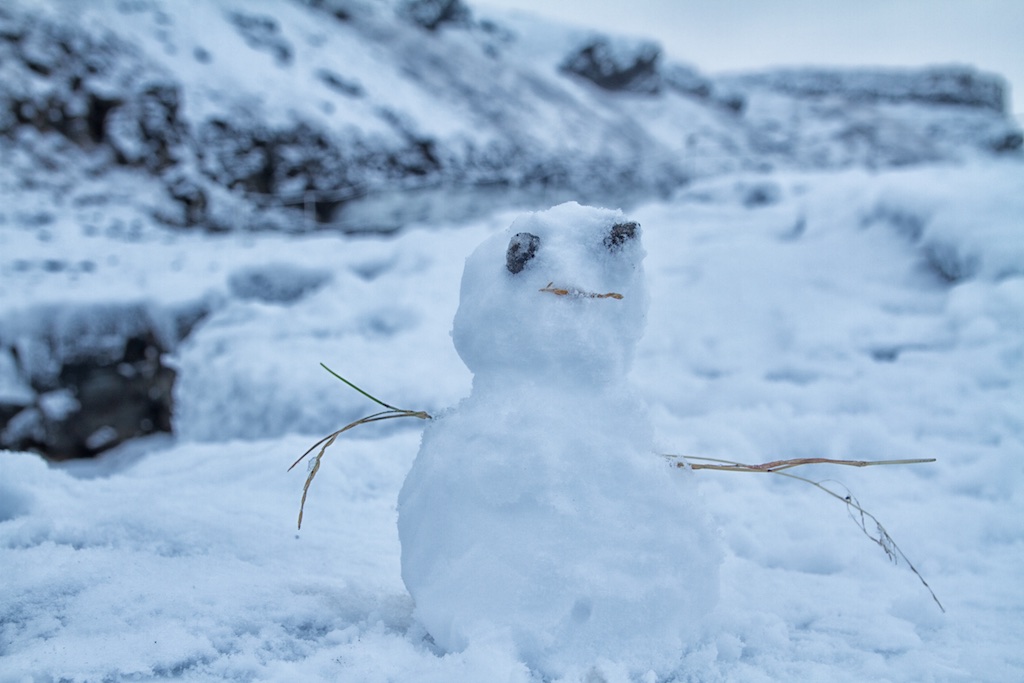 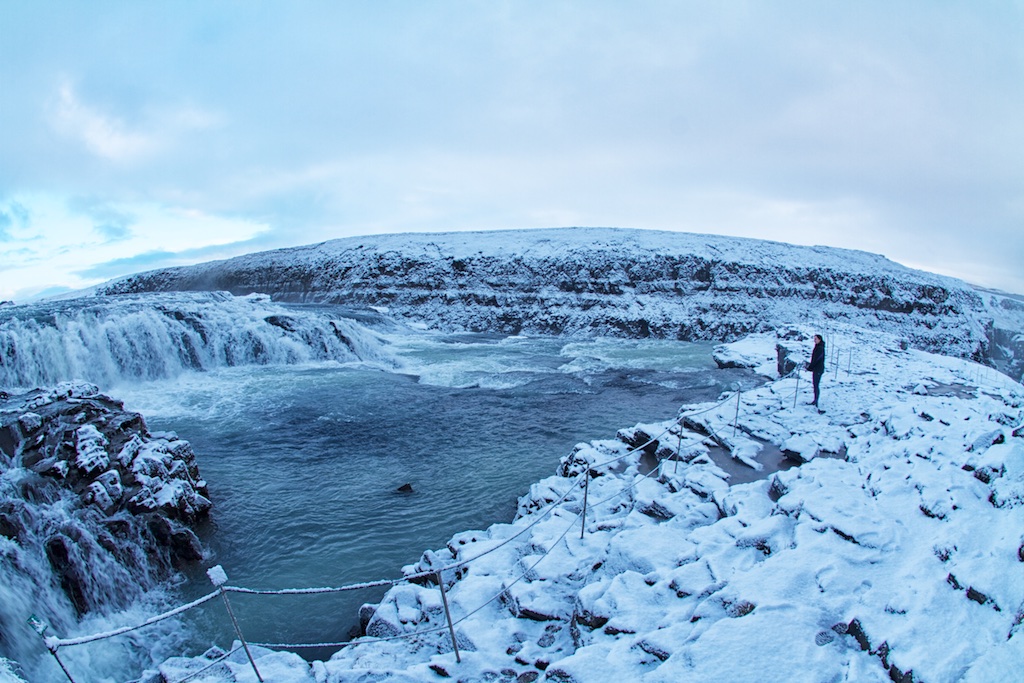 We made our way back up to the second car park and asked a young man if he would take a shot for us and then we took a shot of him and his partner. 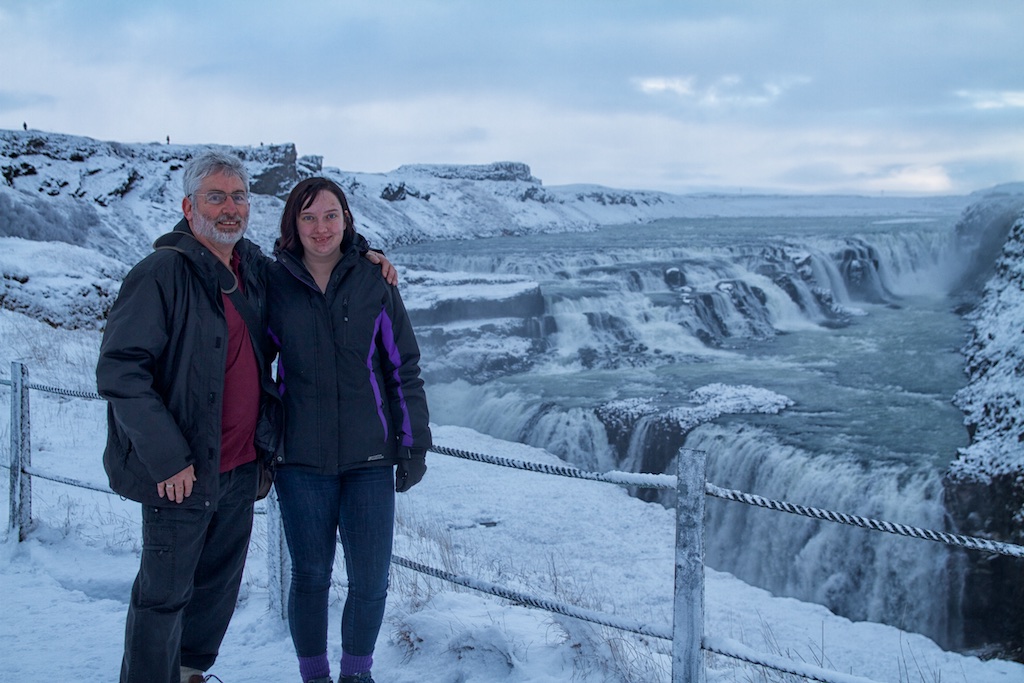 Then we made our way to the viewing platform high above the falls and looked down at the view and the people below.  From here, back to the cafe at the visitors centre for a bowl of soup and bread. 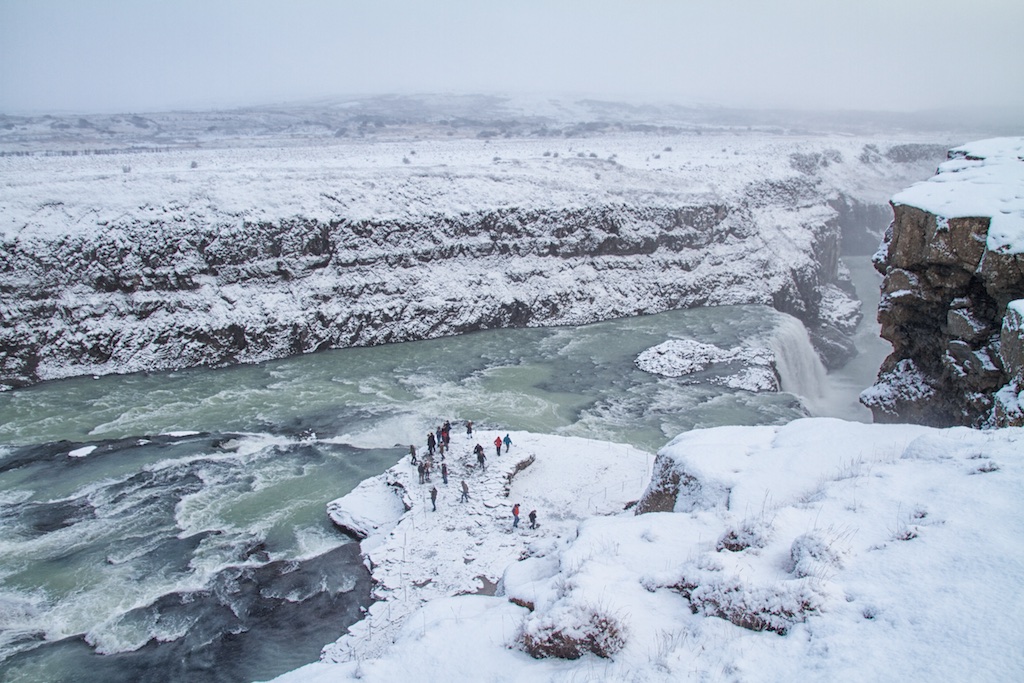 We drove up the road past Gulfoss to look for some lakes but the road conditions were getting worse so we decided to turn back and return to the apartment.  Then we spent an hour or so in the spa pools at the bottom of the road and it was so relaxing at the end of the day.

Tomorrow we're planning to go to Vik, stopping off at Seljalandsfoss, Skógafoss and Dyrhólaey weather permitting (it's fine at the moment).
Posted by ColinWhiteley at 23:14

A Week in Iceland